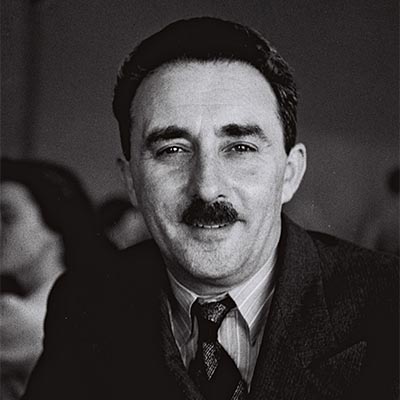 Moshe Shertok was born in 1894 in Kherson, South Russia, and later changed his name to Moshe Sharett. His father, Yaakov Shertok, one of the founders of the Zionist Bilu group, returned to Russia after failing to adapt to agricultural labor. In 1906 he immigrated to Israel with his family and brother, and settled in the Arab village of Ein Sinia, between Jerusalem and Nablus. In this environment, his son learned Arabic and Arab customs.
In 1910 the family moved to Tel Aviv, and Moshe became a member of the first graduating class of the Herzliya Gymnasium. In 1913 he traveled to Istanbul to study law, but his studies were interrupted by the outbreak of World War I. Returning to Tel Aviv, he participated in the "Ottomanization" movement which encouraged Jews to accept Turkish citizenship in order to avoid deportation. In 1916 he enlisted in the Turkish Army and graduated from an officers college in Kushta. After the war ended, he worked as a land purchase agent for the Jewish community's Representative Council, alongside Yehosha Henkin. Together with Dov Hoz and Eliahu Golomb, Sharett became active in the "Achdut Ha'avoda" party and the Hagana.

In 1920 he traveled to London where he received his bachelors degree from the London School of Economics. In 1925 he returned to Israel and worked for "Davar", the Histadrut Labor Federation's daily newspaper. He edited its English weekly from 1929 to 1931, when he assumed the post of Secretary of the Jewish Agency's Political Department. Following the murder of Haim Arlozorov in 1933, Sharett replaced him as head of the department, a position he held until the establishment of the State of Israel. In 1935, Sharett became a senior member of the administration of the Jewish community and the Zionist movement, and was in effect chief negotiator vis-a-vis the British Mandate Authorities. His main achievement during this period was his contribution to the establishment of the Jewish Auxiliary Police Force to ward off Arab attacks.

Following the outbreak of World War II, Sharett worked for the establishment of an Israeli military unit in the framework of the British Army, and the encouragement of Hebrew youth to enlist. These efforts yielded only partial success, and it wasn't until 1944 that the Jewish Brigade was finally established. Sharett was involved in several rescue attempts during the Holocaust, including a paratroopers mission into occupied Europe, and efforts to rescue Jews following Adolf Eichman's "Jews for trucks" proposal.

At the end of the war, Sharett represented the Jewish Agency on various inquiry committees that sought a solution to the problem of the land of Israel. He supported a moderate armed struggle against the British, and in June 1946, was imprisoned by the British Authorities in the Latrun Detention Camp. Following his release, he led the political struggle surrounding the UN's Partition Resolution until its authorization by the UN General Assembly in November 1947.

Sharett became Foreign Minister in the first government, a post he held until 1956. He established the nation's diplomatic service and bilateral relations with dozens of countries and with the UN, of which Israel became a member in 1949.

Israel's hopes that the cease fire agreements following the War of Independence would lead to the signing of a peace treaty were shattered, and as time progressed, the number of violent incidents between Israel and its Arab neighbors increased. Israel adopted a policy of retaliation against the Arab states, a policy which became a source of tension between Sharett and Prime Minister Ben-Gurion. Sharett believed that this policy weakened Israel's international status and failed to achieve its goal - the termination of the Arab attacks.

In January 1954, after David Ben-Gurion retired, Sharett was elected Prime Minister. His tenure was clouded by the continuation of border incidents which worsened Israel's international relations, and the uncovering of a group of Israeli spies in Egypt which operated without the Prime Minister's knowledge. With the retirement of Pinchas Lavon as Minister of Defense, Ben-Gurion returned to the political arena, and headed Mapai in the 1955 elections. In November 1955 he formed a new government and Sharett was appointed Foreign Minister. He remained in this post, despite increasing disagreements with the Prime Minister, until June 1956, when he was forced to resign.

Upon retirement, Sharett became Chairman of the "Am Oved" publishing house, Chairman of Beit Berl College and the Labor Party's representative in the Socialist International.

Sharett passed away in 1965. He was married to Tzipora Meirov, and a father of two sons, Yaakov and Haim, and a daughter, Yael.