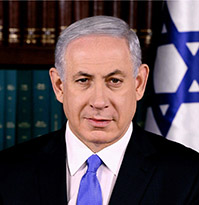 Benjamin Netanyahu was born in 1949 in Tel Aviv and grew up in Jerusalem. His high school years were spent in the United States, where his father, the historian Benzion Netanyahu, taught and conducted historical research.  Returning to Israel in 1967, Mr. Netanyahu enlisted in the IDF and served as a soldier and officer in Sayeret Matkal, a special unit of the Israeli army. He took part in several operations, including the rescue of hostages in a hijacked Sabena airplane in 1972.  In the same year, he was cited for outstanding operational command by General Mordechai Gur, Chief of Israel’s Northern Command.  After his discharge from the IDF in 1972, Mr. Netanyahu served in the Yom Kippur War of 1973 and was promoted after the war to the rank of captain in the Reserves.

Mr. Netanyahu received a B.Sc. degree in Architecture and an M.Sc. in Business Management from MIT.  He also studied political science at MIT and at Harvard University.

Between 1976 and 1982 Mr. Netanyahu worked in the private sector, first with the Boston Consulting Group, an international business consultancy, and then as Marketing Director of Rim Industries in Jerusalem, an industrialized furniture manufacturer.

On July 4, 1976, Mr. Netanyahu’s older brother, Lieutenant Colonel Jonathan Netanyahu, fell while leading the Israeli rescue in Entebbe, Uganda that freed 103 hostages from Palestinian and German terrorists. Mr. Netanyahu established in his brother's memory the Jonathan Institute to help democracies fight international terrorism. Under its auspices, Mr. Netanyahu organized two international conferences in 1979 and 1984 that emphasized the need to fight terrorists and the regimes that support them. US Secretary of State George Schultz has written that Mr. Netanyahu's public advocacy and books on terrorism had a decisive influence in shaping American counterterrorism policy.

In 1982, Mr. Netanyahu was appointed Deputy Chief of Mission at the Israeli Embassy in Washington, DC.  From 1984 to 1988, he served as Israel's Ambassador to the UN, and became widely known for championing Israel's cause in the international arena.  He successfully led the effort to declassify the United Nations archives on war crimes committed by Nazi Germany.

Returning from the UN to Israel in 1988, Mr. Netanyahu was elected to the Knesset on the Likud party list and was appointed Deputy Minister of Foreign Affairs.  During the Gulf War he served as Israel's principal spokesman in the international media.  In 1991 he participated in the Israeli delegation to the Madrid Peace Conference and   in the first Strategic Cooperation talks between Israel and the United States. In 1993 Mr. Netanyahu was elected Likud party chairman and served as Leader of the Opposition until being elected Prime Minister of Israel in 1996.

During his first term, Mr. Netanyahu advocated firmness and reciprocity in matters of peace and security. He advanced the peace process by signing the Hebron and Wye Accords with the Palestinians, and under his security policy the number of terror attacks against Israel fell dramatically. Mr. Netanyahu liberalized foreign currency regulations, accelerated privatization of government-owned companies and reduced the budget deficit.

In 2002, after three years in the private sector as a consultant to hi-tech companies and a highly sought-after public speaker, Mr. Netanyahu returned to politics, first as Minister of Foreign Affairs and then as Minister of Finance.  As Minister of Finance, he enacted sweeping economic reforms that helped pull Israel out of a deep recession and place it on a path of long-term growth.  He controlled government spending, reformed the welfare system, cut tax rates, privatized major state-owned industries, reformed the pension and welfare systems and enacted a major capital market reform.  Since Mr. Netanyahu enacted these reforms, Israel has enjoyed robust growth, declining unemployment, rapidly declining debt levels and steadily growing foreign investment.

In 2009 Mr. Netanyahu was again elected Prime Minister and was subsequently re-elected twice. During his terms in office, Prime Minister Netanyahu has been repeatedly ranked by Forbes Magazine as one of the most powerful people in the world. He continues to lead the transformation of Israel's economy into a global technological power and a world leader in cybersecurity. He is advancing "technology diplomacy" to greatly expand Israel's relations with the leading powers of Asia and the countries of Africa, Latin America and the Muslim world.

The Prime Minister led a multi-billion dollar upgrade of Israeli infrastructure in fast roads and rail links. He ordered the construction of security fences along Israel’s southern border and the Golan Heights that have proven dramatically effective in stopping both terrorists and illegal migrants. Against strenuous opposition, he led the effort to develop Israel’s offshore gas fields, which will turn Israel into an energy exporter. He passed novel antitrust legislation to break up monopolies and increase competitiveness in the Israeli economy. He signed an agreement with the United States for a 10-year security assistance package to Israel totaling $38 billion. He was a principal leader of the effort to place sanctions on Iran to halt its quest for nuclear weapons, taking Israel's case to the United Nations and the US Congress. He has repeatedly vowed that Israel will always be able defend itself by itself against any threat.

Mr. Netanyahu twice oversaw military operations against terrorist attacks from Gaza and adopted a policy of firmly responding to attacks on Israel from other fronts. He ordered the treatment of thousands of wounded Syrian civilians. Under this policy, Israel has stayed largely immune to the upheavals that have gripped many countries in the Middle East. Mr. Netanyahu believes that Israel, the United States and other countries in the Middle East should join forces against the threat of militant Islamic terror.

Prime Minister Netanyahu is deeply committed to pursuing a secure and lasting peace with all of Israel's neighbors and continues to work toward that end.

Mr. Netanyahu has written and edited the following books that appeared in Hebrew and English, with some also translated into Chinese, Russian, French, Arabic, Japanese and other languages:

Mr. Netanyahu is married to Sara, a psychologist, and is the father of three.  The Netanyahus live in Jerusalem.