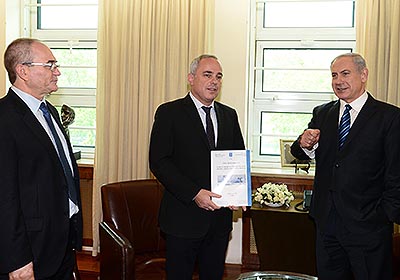 Publication of the Report of the Government Review Committee Regarding the France 2 Al-Durrah Report, its Consequences
and Implications

The Government Review Committee: "The France 2 report's central claims and accusations had no basis in the material which the station had in its possession at the time…There is no evidence that the IDF was in any way responsible for causing any of the alleged injuries to Jamal or the boy"

Prime Minister Benjamin Netanyahu received today the report of the Government Review Committee on "The France 2 Al-Durrah Report, its Consequences and Implications." The report was presented by the Minister of International Affairs, Strategy and Intelligence Yuval Steinitz, in the presence of Director General of the Ministry of International Affairs and Strategy, Yossi Kuperwasser.

Prime Minister Netanyahu directed then Minister of Strategic Affairs Yaalon to set up the governmental review committee in September 2012. The purpose of the committee was to examine the Al-Durrah affair in light of the continued damage it has caused to Israel, and to formulate the Government of Israel's position with regards to it.

Prime Minister Benjamin Netanyahu: "It is important to focus on this incident – which has slandered Israel's reputation.  This is a manifestation of the ongoing, mendacious campaign to delegitimize Israel.  There is only one way to counter lies, and that is through the truth.  Only the truth can prevail over lies."

Minister of International Affairs, Strategy and Intelligence Yuval Steinitz: " The Al-Durrah affair is a modern-day blood libel against the State of Israel, alongside other blood libels like the claims of an alleged massacre in Jenin.  The France 2 report was utterly baseless."

The Al-Durrah affair has its origins in a media report first aired by the French public television channel France 2 on September 30, 2000. The report claimed to show the killing of a Palestinian boy, targeted along with his father, according to the report, by fire from an Israeli position. The story was quickly relayed worldwide by the international media, which repeated the report's claim. The report had the immediate effect of harming Israel's international standing and fanning the flames of terror and hate.

Since that day, the narrative spawned by the France 2 report has served as an inspiration and justification for terrorism, anti-Semitism, and the delegitimization of Israel.  The echoes of the Al-Durrah report, both in terms of accusations against Israel and in terms of media reports adopted uncritically by the international media which are later revealed to be false or misleading, have continued to resonate in the media coverage of Israel's operations against terrorist organizations.

In light of the Al-Durrah narrative's continued deleterious consequences, Prime Minister Benjamin Netanyahu directed then Minister of Strategic Affairs Yaalon with setting up the governmental review committee. The committee was comprised of representatives of relevant government ministries and official bodies, and consulted with outside experts.

Following an extensive review of materials related to the affair, the committee determines that:

• The France 2 report's central claims and accusations had no basis in the material which the station had in its possession at the time of the report:

o Contrary to the report's claim that the boy is killed, the committee's review of the raw footage showed that in the final scenes, which were not broadcast by France 2, the boy is seen to be alive.

o The review revealed that there is no evidence that Jamal or the boy were wounded in the manner claimed in the report, and that the footage does not depict Jamal as having been badly injured. In contrast, there are numerous indications that the two were not struck by bullets at all.

o The review showed that it is highly-doubtful that bullet holes in the vicinity of the two could have had their source in fire from the Israeli position, as implied in the France 2 report.

• The report was edited and narrated in such a way as to create the misleading impression that it substantiated the claims made therein.

• Over time numerous additional inconsistencies and contradictions have come to light, and question marks have been raised regarding nearly every aspect of the report.

• The report relied entirely on the station's local stringer, without additional evidence for his claims, and this despite the fact that there were numerous other media crews on the scene. The stringer's various claims regarding the affair in the years since the incident have been characterized by repeated contradictions and falsehoods.

The Al-Durrah affair demonstrates the need for media outlets to implement the highest professional and ethical standards when covering asymmetric conflicts. There is a particular need for international media outlets to critically evaluate information provided by local stringers, especially in arenas in which repeated attempts to stage or fabricate media items have been documented.

An additional lesson of the Al-Durrah affair is that countries which scrupulously adhere to the international laws of armed conflict must not remain complacent in the face of misleading or mendacious media coverage. Rather they must investigate the claims in a thorough and timely manner and present their findings to the public.