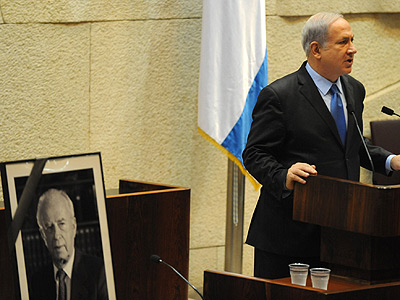 Photo by GPO
Yesterday I read the final speech given by Yitzhak Rabin from this podium.  It was a speech he gave on October 5, 1995, one month before that black day in the history of our people when he was slain by a vile murderer who cannot and will never be forgiven.

I know all too well that one cannot reduce a political leader’s worldview down to one speech.  Every speech is the consequence of a certain reality, of a certain context and of a certain time.

Nevertheless, certain aspects of Yitzhak Rabin’s final speech reverberate throughout the years, and have not lost any of their vitality or strength.

In that speech, Yitzhak Rabin said: “The land of the prophets, which bequeathed to the world the values of morality, law and justice, was, after two thousand years, restored to its lawful owners -- the members of the Jewish people. On its land, we have built an exceptional national home and state.”

“However, we did not return to an empty land. There were Palestinians here who struggled against us for a hundred wild and bloody years. Many thousands, on both sides,” he said, “were killed in the battle over the same land, over the same strip of territory, and were joined by the armies of the Arab states.”

Yitzhak Rabin said, “We view the permanent solution in the framework of State of Israel which will include most of the area of the Land of Israel as it was under the rule of the British Mandate, and alongside it a Palestinian entity which will be a home to most of the Palestinian residents living in the Gaza Strip and the West Bank.”


“We would like this to be an entity which is less than a state, and which will independently run the lives of the Palestinians under its authority. The borders of the State of Israel, during the permanent solution, will be beyond the lines which existed before the Six Day War. We will not return to the 4 June 1967 lines.”
“The security border of the State of Israel will be located in the Jordan Valley, in the broadest meaning of that term.”

“Jerusalem,” Rabin said in his speech, would be “united as the capital of Israel under Israeli sovereignty,” and “will include both Ma'ale Adumim and Givat Ze'ev”.

“We came to an agreement, and committed ourselves before the Knesset, not to uproot a single settlement in the framework of the interim agreement, and not to hinder building for natural growth.”

I hereby conclude the summation of Prime Minister and Minister of Defense Yitzhak Rabin’s final speech in this hall.

These things were said 15 years ago, and naturally I have a great deal to add to them after so many years.

But on this special day, I ask that the words and voice of Yitzhak Rabin echo and be heard without any additions and without interruption, other than two short remarks.

The first brief remark is an obvious one regarding construction and the moratorium: I already said that the temporary construction moratorium was a gesture made by no other previous government, and I believe that Yitzhak Rabin’s words in this regard are an additional confirmation of this observation.

In addition, construction in existing communities in Judea and Samaria does not contradict the aspiration for peace and an agreement.

The second remark has to do with his reference to the Palestinian entity that would be established.  Yitzhak Rabin spoke of, and I quote: “less than a state”.  I do not know what he intended at the time.  Today, we say “a demilitarized state that recognizes the state of the Jewish people”.  We do not want to deny the Palestinians their right of self-definition.  We do not want to rule them.

We can prevent it through real security arrangements and we must stand behind them.  I have no doubt that Yitzhak Rabin, as a man in the security field, would fully agree with this insistence.  I am not just saying this facetiously.  Because at the root of these statements, there is no argument about separation; there is no argument about peace.  But there is the legitimate and necessary question of what will happen the day after, and how we will ensure that what happened twice will not happen a third time.  We want peace.

The years that passed narrowed the gaps and brought the positions of the various parts of the nation closer together.  This growing closeness may help us reach an agreement, but it does not mean that is only dependent on us here in Israel.

However, one thing is certain: with unity or without it, with an agreement or without it, there is one clear and unequivocal statement regarding any disagreement between us: there is no room for violence like the kind that ended the life of the Prime Minister and Minister of Defense, commander of the Six Day War, Palmach fighter, Jerusalemite – Yitzhak Rabin.

Even after 15 years, we are still struck by grief and pain.  We will hope and pray, work and endeavor, so that the lesson will be learned and will never be forgotten.  We will act fearlessly and with determination to achieve peace and security for our nation, because only a true combination of the two will ensure our future.

May the memory of Yitzhak Rabin be blessed.