Environmental Protection Minister Gila Gamliel: We have identified the crude oil tanker that polluted the shores of Israel. It is a Libyan-owned ship that was carrying cargo from Iran to Syria. We will reckon with the environmental criminal who polluted the coasts of our country, and we will demand compensation on behalf of all Israeli citizens, for this damage to our health, nature, marine animals, and the landscape. 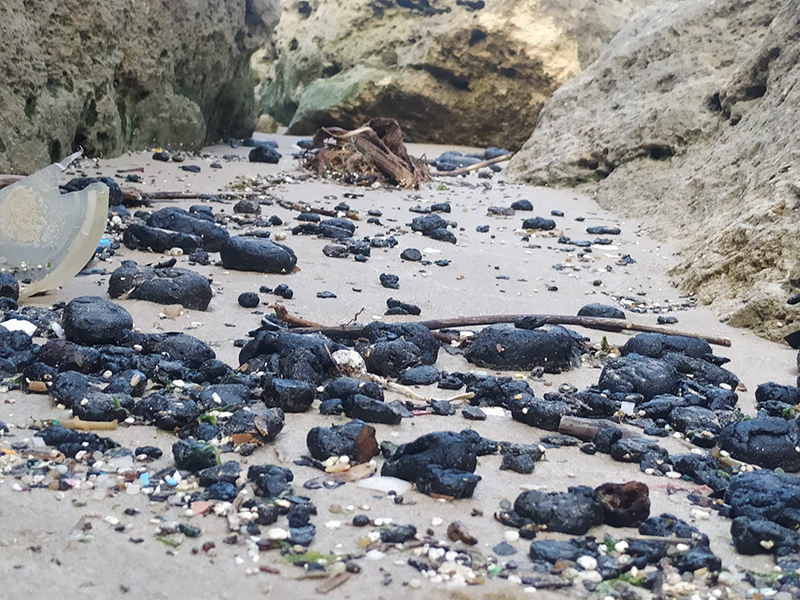 Following an intensive two-week investigation, the Ministry of Environmental Protection has identified the oil tanker that was responsible for an oil spill that left Israel's beaches littered with tar. The investigation was led by the MoEP's Marine Environment Protection Unit, and was carried out with the assistance of partners from Israel and international bodies.

The culprit, says the Ministry, is the Libyan-owned Emerald tanker. The investigation team formulated the following situation: The Emerald is old, about 19 years old, and cannot therefore be received at European or U.S. ports. It was carrying 112,000 tons of crude oil. The oil spill occurred between February 1st and 2nd, within dozens of kilometers of the Israeli coastline, in Israel's economic waters.

Environmental Protection Minister Gila Gamliel: "This is a crude oil tanker called Emerald, owned and operated by a Libyan company. It was illegally carrying cargo from Iran to Syria. The ship was flying Panama's flag. Iran is waging terrorism not only by trying to arm itself with nuclear weapons or trying to establish a basis near our borders. Iran is waging terrorism by harming the environment. Our battle on behalf of nature and animals must be a cross-border one. Together, we will bring to justice those responsible for the environmental terrorism, those who committed this crime against humanity. We will continue to rehabilitate the damaged beaches and the animals that were harmed. Together, we will win, and we'll remove the pollution from our country's shores."

The investigation team was led by: director of the Ministry's Marine Environment Protection Unit, Rani Amir; head of the special investigation team, Rami Peleg; chief investigator, Nir Levinsky; attorney Yoni Shamir from the Ministry's Green Police; and Maayan Haim and Yoav Ratner from the Marine Environment Protection Unit. They were assisted by Israel Oceanographic and Limnological Research and Windward, an Israeli company. They received data from foreign agencies such as the U.S.'s National Oceanic and Atmospheric Administration and the European Maritime Safety Agency.

It should be noted that no source had prior information about a suspicious stain in the Mediterranean that led to the pollution incident, which was only discovered when lumps of tar began washing ashore onto Israeli beaches on February 17th. Therefore, all analyses of the event were retrospective, using tracking of ship data and satellite imagery.

European satellites found retrospective documentation of an oil stain on February 5th, dozens of kilometers off the coast of Israel, which could be associated with the tanker in question. This may be an early incarnation of the oil stain that was discovered on Feb. 11th, some 50 km off Israel's coast. Experts say modeling shows that the tar that landed on Israel's beaches came from the location of that stain.

Laboratory tests of the samples taken by the MoEP immediately after the incident, as wel as in the following days, revealed that it was crude oil. Thus the list of potential suspects was reduced from about 35 ships to four tankers: Two were ultimately excluded due to their location in the days before the incident. Another tanker was inspected in Spain (by a local team) and in Greece (by the Israeli investigation team) and was ruled out as a source of contamination. The fourth tanker, now in Iran, is the Emerald, and has been named responsible for the incident.

Analyses of satellite images and models run by researchers from the MoEP, IOLR, and Windward show that the ship smuggled crude oil from Iran into Syria. The tanker was "dark" when it left the Iranian region, meaning her AIS (automatic identification system) was turned off. Before reaching the Suez Canal, the tanker's equipment was turned on, and it crossed the canal in Egyptian territory. Then, it went dark again before entering Israel's economic waters.

Between February 1st and 2nd, the ship polluted Israel's economic waters while in motion and with its equipment turned off. When it reached Syrian territory, it once again turned on its devices. Between February 3rd and 14th, the tanker unloaded all the crude oil it was carrying onto other vessels.

During this period of time, satellites discovered two more stains between Cyprus and Syria, in the area the ship had sailed. The vessel returned to Iran again, again in the "dark" when it entered Israel's economic waters; it stayed that way until it reached a port in Iran, where it is currently anchored.

The Ministry of Environmental Protection, together with the Shipping and Ports Authority, will contact the Emerald's insurers, and will do whatever necessary to ensure that the State of Israel receives compensation from the International Oil Pollution Compensation Funds.

Ami Daniel, Windward CEO and founder: "As an Israeli company that understands the importance of the sea, we mobilized from the first moment to assist the Ministry of Environmental Protection in locating the source of the disaster, and we voluntarily donated the use of our system. The Windward system and its researchers provided quality information, based on artificial intelligence, through which the event was analyzed."