Ministry Meausres, Including Creation of Low-Emission Zone, Result in Decrease in Black Carbon in Haifa

Since a low-emission zone was created in Haifa's lower city in February 2018, there has been a significant improvement in pollution. This includes a 24% decrease in the black carbon rate in the last year, a 34% decrease in black carbon since the LEZ began operating, and a 19% drop in nitrogen oxide concentrations. Low-emission zones, or LEZs, are areas in which diesel vehicles defined as polluting are prohibited from entering, unless particulate filters have been installed in them. 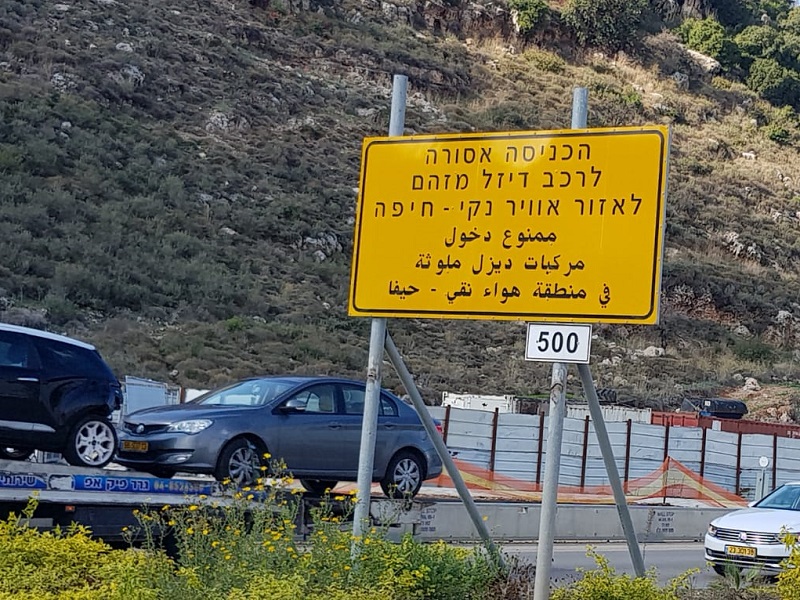 The Ministry of Environmental Protection is publishing data that show that the low-emission zone it has created in Haifa has resulted in better air quality. The LEZ was established in Haifa's lower city in 2018, as part of the Haifa Bay Action Plan to Reduce Pollution and Environmental Risks. This means diesel vehicles defined as polluting are prohibited from entering the area unless particulate filters have been installed in them. In order to help diesel vehicle owners fulfill this obligation, the MoEP subsidized the installation of particulate filters on diesel vehicles.

As a result of this action, and other extensive MoEP activities in recent years, and due to the connection of many factories in Haifa Bay to natural gas, the air quality today in the Haifa metropolitan area is no worse than the air quality in other metropolitan areas in Israel. despite the high concentration of industry there. Still, Haifa Bay remains one of the centers of air pollution in Israel, due to its large concentration of industrial plants and transportation loads near population concentrations, port activity, railways, and trucks and mechanical engineering equipment serving the port and factories.

Environmental Protection Minister MK Gila Gamliel: "Haifa residents deserve clean air. Today it come as a result of green transportation, and soon, as a result of the closure of the Oil Refineries Ltd. factories. Every year, about 1,100 people die prematurely in Israel as a result of air pollution caused by polluting vehicles. The findings we are now publishing confirm the Ministry of Environmental Protection's position, that LEZs are an effective means of contributing to the improvement of air quality within cities. We call on other cities in Israel to join Haifa and Jerusalem and hundreds of cities in Europe, and to declare low-emission zones in their territories, thus preventing the emission of pollutants from old vehicles near population centers. We intend to also lend financial support to other cities that adopt this model and take care of their residents."

In the last two years (February 2018 to February 2020), since the LEZ was created, the air quality monitoring station in Haifa's lower city has show a cumulative decrease of 34% in black carbon concentrations . The decline in the last year was 24.2%. In addition, there was an 18.6% decrease in nitrogen oxides.

The second of Israel's LEZs began operating in Jerusalem in February 2020, as part of a joint initiative between the MoEP and the Jerusalem municipality. Since Feburary, old, heavy (3.5 tons or more), polluting diesel vehicles have been banned from downtown Jerusalem, unless a particulate filter has been installed in the vehicle. Phase begins in September 2020, when the rule will be expanded to light diesel vehicles (less than 3.5 tons) as well, and the entire municipal jurisdiction will be an LEZ.