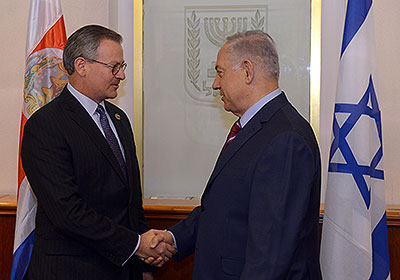 Photo by Haim Zah, GPO
Prime Minister Benjamin Netanyahu met with Costa Rican Foreign Minister Manuel Gonzalez Sanz and told him, "I am glad we have the opportunity to meet and to strengthen the friendship between Costa Rica and Israel."

Prime Minister Netanyahu emphasized that the reason peace has not been achieved in the conflict with the Palestinians is, and remains, the Palestinian refusal to agree to the existence of the state of the Jewish People within any borders whatsoever. He also called on Costa Rica to change its voting pattern at the UN and international organizations on issues relating to Israel.