PM Netanyahu Meets with US Secretary of the Treasury Steven Mnuchin 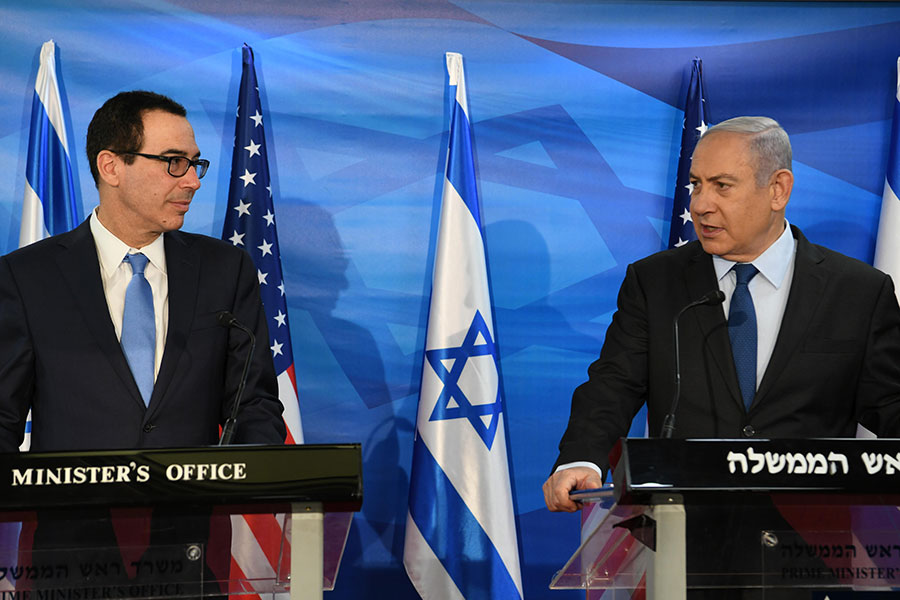 Prime Minister Benjamin Netanyahu, this afternoon, at the Prime Minister’s Office in Jerusalem, met with US Secretary of the Treasury Steven Mnuchin.

Prime Minister Netanyahu at the start of the meeting:

“Welcome, Secretary Mnuchin. This is I don’t know which visit since you took office. Our relationship and our alliance has never been stronger.

First, I want to congratulate President Trump, the Armed Forces of the United States and the American people for the successful action against Baghdadi, and it’s good that this murderer has met his fate. We do know that we still have an ongoing battle against terrorism, both of the extremist Sunnis led by Daesh, but also the extremist Shiites led by Iran, that is making a plunge for everything and everywhere in the Middle East.

Iran is seeking to develop now precision-guided munitions, missiles that can hit any target in the Middle East with a circumference of five to ten meters. They are developing this in Iran. They want to place them in Iraq and in Syria, and to convert Lebanon’s arsenal of 130,000 statistical rockets to precision-guided munitions. They seek also to develop that, and have already begun to put that in Yemen, with the goal of reaching Israel from there too.

We view Iran as the greatest threat to peace, stability and our security, and the security of many others. They fired into Saudi Arabia. They’ve interfered with international shipping lanes. They’ve attacked Americans and they’ve killed Americans throughout the last ten years in Afghanistan and elsewhere. Iran is the single greatest threat to stability and peace in the Middle East. That doesn’t mean that there are no others. There are. We are, the Middle East is rich with several things, and one of them is terrorist-exporting nations and groups.

So while there’s a tremendous achievement yesterday in the action against the leader of Daesh, there still remains a massive effort against the other forces of terror, and the nation, the terror-state of Iran.

We have enjoyed great support from the United States in this effort twice. One, in the military assistance that the United States generously gives us. And second, in the effort that you and President Trump lead all the time, which is the increase of sanctions against Iran. You have recently added the anti-money laundering sanctions, which apply to the banks. That’s a very powerful tool, in addition to others that you put forward. And I encourage you to put even more. Iran’s capacity—we see this very clearly—to launch its aggression, to develop its weapons of death, to purvey its menacing ways: that capacity is diminished to the extent that you can tighten your sanctions and make their, the availability of cash more difficult for them. We see this in every part of the Middle East.

I want to thank you for what you’ve been doing, and encourage you, Steve, to do more, more, a lot more. And thank you for your friendship.”