PM Netanyahu Attends Ceremony Marking the Start of the 2019-2020 School Year and Gives a First Grade Lesson, together with Education Minister Rafi Peretz, at the Kramim State Religious School in Elkana 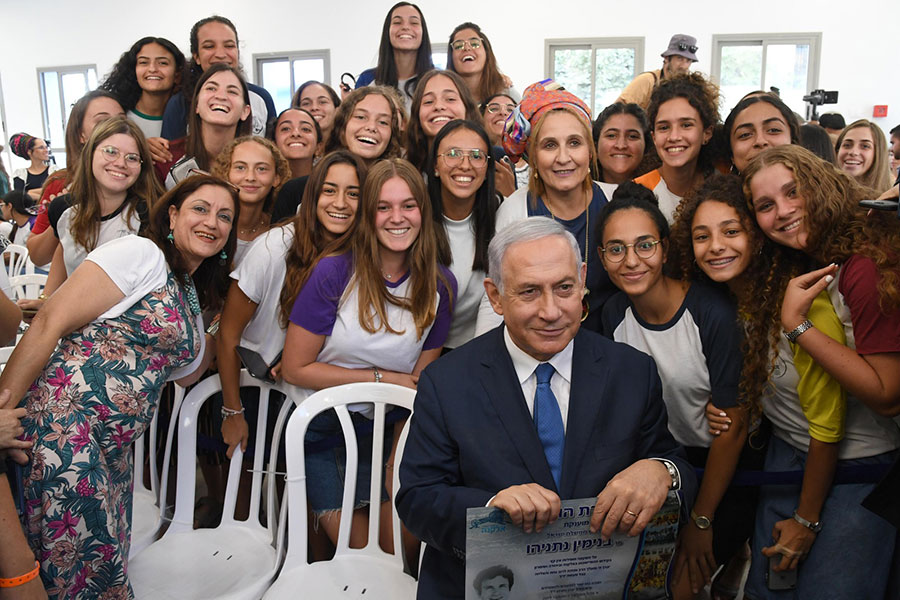 Prime Minister Netanyahu, together with Education Minister Rafi Peretz, at the state religious Kramim School in Elkana, attended a ceremony to mark the start of the 2019-2020 school year and gave a lesson to first grade pupils.

Following is an excerpt of Prime Minister Netanyahu’s remarks at the ceremony:

“We are building new homes here. This is a new home that is an old home. This is the old, original home of the Jewish people and we will build more in Elkana. We will not uproot anyone here. There will be no more Gush Katif; there will be no more uprooting, and with G-d’s help we will apply Jewish sovereignty over all communities as part of the land of Israel and the State of Israel.

I wish you a lively and successful school year. Learn, study and read. I want you to read books, many books. May you all have a good and successful year.”

Afterwards, Prime Minister Netanyahu dedicated the Yoni Netanyahu School for Excellence and spoke with pupils at the Ort Samaria High School for Girls (ulpana) in Elkana.

Prime Minister Netanyahu responded to a pupil’s question about the Israeli-Palestinian conflict:

The Palestinians, in their refusal to recognize Zionism, are the root of the conflict, as is their refusal to recognize the rights of the Jews to settle in any part of the land of Israel and their repeated rejection of every possible solution. Even now, the Trump plan, he has not even made it known, and they have already rejected it. They are not prepared to recognize the right of the Jews to exist here in a sovereign state on any territory. This is the root of the conflict; therefore, I emphasize this and strive for this, that the recognition of the national state of the Jewish People must be demanded of them. This is the first – but not the last – component of any solution.

What the solution will be is not important. Nobody knows if such an agreement will last; therefore there has to be one more small detail – security in our hands, west of the Jordan [River].”

Prime Minister Netanyahu responded to a pupil’s question about the security situation:

They are doing this in Syria of course. We are struggling on all of these fronts and, in effect, we have a very consistent and systematic line – to take action on all of these fronts and, above all, to prevent our main enemy, without which everything would collapse, from entrenching militarily in our region, and preventing it from attaining nuclear weapons which would absolutely change the balance here, not just what is termed the non-conventional, but also the conventional balance. If our enemies will have rockets that also carry atomic bombs aimed at us, their ordinary threat would be 100 times worse.

We are striking at terrorism in Judea and Samaria. The ISA thwarts around 500 terrorist attacks a year; this is almost two per day. We are thwarting it there because we are here. We are not only engaged in hot pursuit, we are constantly striking at the weeds. We are making arrests and from time to time tragedies – such as you have now read about – happen to us. It is impossible to stop them all – but we find them all in the end. In recent years we have found all of the murderers and if we did not, there would be hundreds more successful attacks here.

We are dealing with extremist Islam led by various elements, but in the end, the biggest threat to our existence comes from Iran. Over the long years, we have led a consistent struggle almost alone. I am pleased that President Trump has decided to adopt the unyielding stance and has withdrawn from this bad agreement. Of course, the US supports our efforts in Syria and in the region to confront those who champion our destruction.

Relatively speaking, in the years that we have led the State of Israel, we see that the number of our losses – both civilian and military – is relatively lower, including the area adjacent to the Gaza Strip in which – to my sorrow – a soldier and several civilians have been killed. In the past five years, this is the smallest number since the Six Day War. This is the result of our readiness to engage. I am not happy to engage because I know the price that we pay with the best of our sons, and sometimes our daughters but when it is necessary – we are not deterred.

I reiterate to our enemies, especially Iran – whoever comes to destroy us places himself in similar danger.”