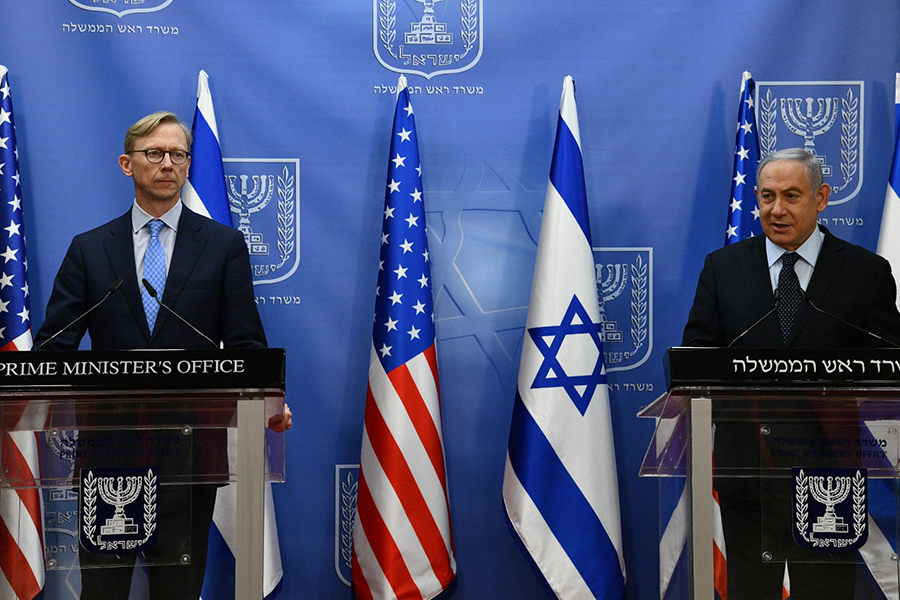 We have serious issues to discuss. They are so serious that they can't even wait for COVID-19 and I appreciate your making the visit to Israel today.

Iran denies access to the IAEA inspectors to important sites, some of which we have uncovered through our own activity. It continues its rampant aggression across the Middle East and beyond. It arms, trains, finances and dispatches terrorists.

Iran is doing all that and most of the international community is doing nothing in the face of it. And worse than nothing, many countries collude in this aggression. So I want to thank President Trump. We expressed our appreciation to what he and your administration is doing.

Iran tried to intimidate the United States from taking action against Iranian aggression. It wanted to apply sufficient pressures so that the United States would back off from this campaign of maximum pressure.

The Iranian Revolutionary Guards, led by the arch-terrorist Qassem Soleimani, launched a proxy war against the United States forces and allies in the region and I can say that the plan failed. It failed because the United States refused to be intimidated, and in fact, you took important and courageous decisions to take out Soleimani. And by removing that arch-terrorist, you drew a clear line in the sand. A line was etched in deeds, not in words. And I think those deeds speak loudly all the time to everyone in this region.

Now without the determination to use military force against those who plan to attack you, the danger simply grows greater and greater. This is a policy Brian that we have adopted as well.

We are absolutely resolved to prevent Iran from entrenching itself militarily in our immediate vicinity. We take repeated and forceful military action against Iran and its proxies in Syria and elsewhere if necessary. And I say to the ayatollahs in Tehran, Israel will continue to take these actions necessary to prevent you from creating another terror and military front against Israel in Syria. And I say to Bashar al-Assad, you're risking the future of your country and your regime. Israel will not allow Iran to establish a military presence in Syria.

Brian, in response to the repeated Iranian provocations and violations, you have taken important actions and I believe it is time to implement now snapback sanctions. I don't think we can afford to wait. We should not wait for Iran to start its breakout to a nuclear weapon because when that happens it will be too late for sanctions.

So my position remains clear. We will do whatever is necessary to prevent Iran from developing nuclear weapons. I know that's your position as well. This is part of the great partnership and alliance between both our countries.

Again I want to thank you for your friendship, for your resistance to aggression and for your sponsorship to our alliance.”