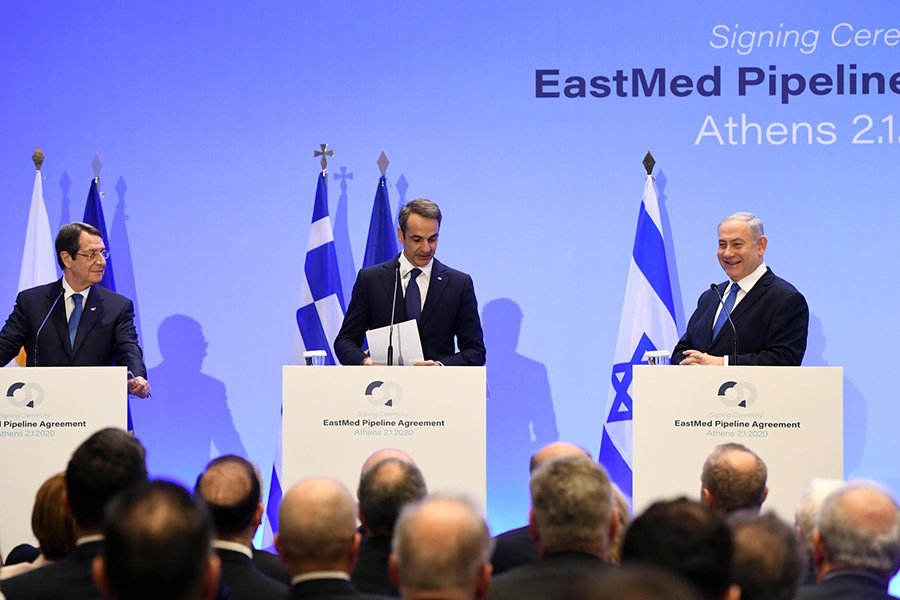 Prime Minister Benjamin Netanyahu, Greek Prime Minister Kyriakos Mitsotakis and Cypriot President Nicos Anastasiades, today, in Athens, met in the context of the seventh trilateral at which was signed the agreement for the EastMed gas pipeline that will run from Israel through Cyprus and Greece to Europe. Signing the agreement were Energy Minister Yuval Steinitz, Greek Environment and Energy Minister Konstantinos Hatzidakis and Cypriot Energy, Commerce, Industry and Tourism Minister Georgios Lakkotrypis.

This inter-governmental agreement is pursuant to the 2017 MOU and the subsequent preliminary feasibility study. The agreement anchors the commitment of the three countries to the establishment of the project.

Prime Minister Netanyahu at the joint declarations with the leaders:

"This is a historic day for Israel, because Israel is rapidly becoming an energy superpower, a country that exports energy.

Just days ago, we opened the Leviathan gas field, and it is producing enormous yields. But with the exportation that will become possible via this pipeline, we will be able to provide hundreds of billions of shekels in revenue to the citizens of Israel—for their welfare, for health, for the young people and the elderly, for everyone. This is an extraordinary development.

I would also like to mention that we signed a supply agreement with our Arab neighbors. This strengthens the peace, the economy and the future.

This is also a historic day because the cooperation between Greece, Cyprus and Israel is growing stronger. This is a true alliance in the Eastern Mediterranean that is economic and political, and it adds to the security and stability of the region. Again, not against anyone, but rather for the values and to the benefit of our citizens.

This is a tremendous change. Israel was always a 'fringe country' a country that did not have any connections, literally and figuratively. Now, in addition to our foreign relations, which are flourishing beyond all imagination and everything we have known, we have a specific alliance towards these important goals in the Eastern Mediterranean."