PM Netanyahu Remarks at the Start of the Weekly Cabinet Meeting 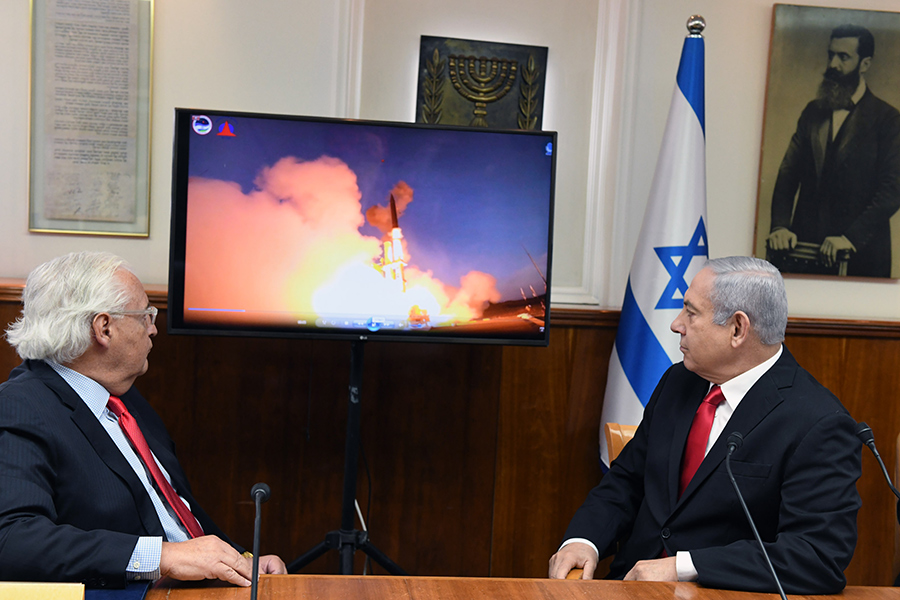 Prime Minister Benjamin Netanyahu, today, at the start of the weekly Cabinet meeting, made the following the remarks:

"In recent weeks we have carried out three pioneering secret experiments of the Arrow 3 missile. These experiments were held in the US, in Alaska, in full cooperation with our great ally the US.

They were successful beyond any imagination. The Arrow 3 – with complete success – intercepted ballistic missiles beyond the atmosphere at unprecedented altitudes and speeds. The execution was perfect – all precise hits.

Today Israel has the ability to act against ballistic missiles that could be launched against us from Iran or anywhere else. This is a great achievement for the security of Israel.

All of our enemies should know that we will overcome them in both defense and offense."

"I would like to make it clear here that metal hit metal; it was not just a proximity detonation. The missile hit the missile all three times. This is a great achievement. First of all, I would like to thank – of course – the US Ambassador to Israel and, through you, the US administration as well.

I would like to express deep and strong appreciation for advancing our joint security.

I would like to thank the Defense Ministry, the IDF, IAI and our ambassador, Ron Dermer, who was in Alaska for this.

I want to thank all of the engineers and developers who brought about this breakthrough, this leap forward, which is considerable for the security of Israel with very great significance, especially at this time."

"On behalf of President Trump and the Trump administration, I just would like to tell you how delighted we were with the successful results of the test of the Arrow 3 missile system, a critical element of Israel's missile defense.

The results were extraordinary. We're very proud of our partnership with the State of Israel, the funding that we provided for this, the technical expertise that we added, obviously making our airspace available for this test over Alaska.

This is an extraordinary and an unprecedented example of the cooperation between our two great countries and from here may we continue to go upward and onward in making the world a safer place."

"Like the Prime Minister said, this is an unprecedented operation. This is a technological, operational and logistical breakthrough. At the forefront of technological and operational knowledge, we had three interceptions in a row, in space, at very high altitudes and at a very great distance, of long-range ballistic missiles.

This symbolizes the coherent and unprecedented cooperation with the US. We worked as one team with the US Missile Defense Agency. We sat together at one location 24/7 for a long time. All of this was under the leadership of the Defense Ministry Israel Missile Defense Organization headed by Moshe Patel, the security industries, IAI, Elbit-Elisra and RAFAEL, which worked together as a single team, of people aged 20-78, 24/7 continuously, and other agencies in support."