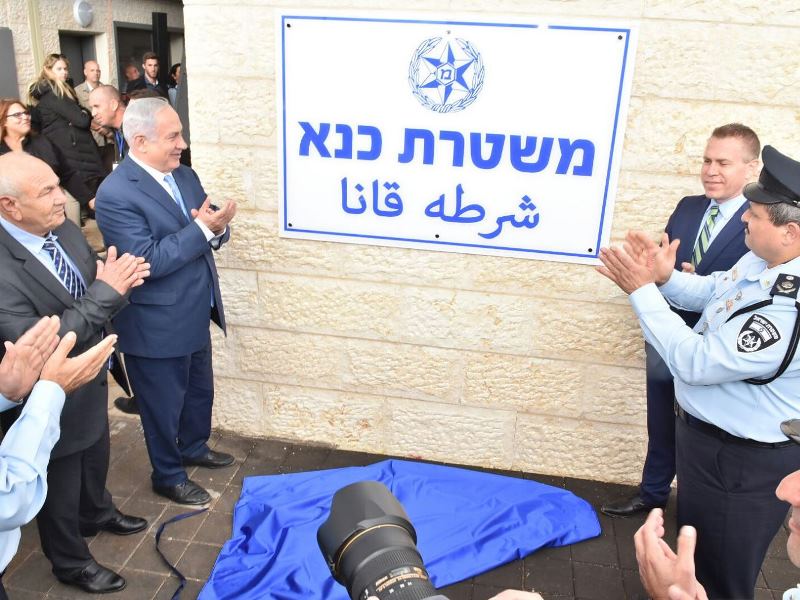 The Minister of Public Security, MK Gilad Erdan, together with Prime Minister Netanyahu and Police Commissioner Alsheich, inaugurated two new police stations on November 21st in Jisr az-Zarqa and Kafr Kanna.
The first station to be inaugurated was in Jisr az-Zarqa, located near Caesarea. The station is manned by 30 police officers and is expected to expand to 60 by 2019. Later, Minister Erdan inaugurated the Kafr Kanna station, located near Nazareth. The Kafr Kanna station is manned by 70 police officers, and is expected to reach 90 officers by 2019. An additional historic feature of the Kafr Kanna station is that it is the first station in the Arab sector with a female station chief – Chief Superintendent Meirav Vagner.
The Arab sector has experienced law enforcement neglect for many years and the residents lack personal security. Since taking the role of Minister of Public Security, Minister Erdan has made the issue of policing and law enforcement in the Arab sector a top priority. Because of its importance, a budget of NIS 1.2 billion was allocated for a special program to deal with these issues.
The two new stations are part of a larger program to open 17 police stations in the Arab and Bedouin sectors, which will incorporate 1,300 police officers – 650 of whom are Muslim. These additional officers will provide service to the Arab population and increase police presence in Arab towns and cities.The construction of the stations and the enlistment of the officers is expected to be completed by 2021.
In addition to new police stations, a large-scale campaign was conducted in Arabic to encourage the enlistment of young men and women from the Arab sector to the Israel Police. Additionally, on police cars in the North of Israel there will be writing in Arabic, and the Israel Police has opened an Arabic Facebook page in order to provide information to the Arabic-speaking public and improve relations between the police and Arabic speakers.
The efforts to improve police services in the Arab sector are paying off – according to a recent police survey, there has been an 85% rise in young Muslims joining the ranks of the Israel Police. In 2017, 130 Arabs joined the police, compared to just 70 in 2016. The National Police Academy has even adapted its courses for Arabic speakers in order to attract young Muslims who are interested in joining the Israel Police.