In recent years, a planned and coordinated campaign is being waged to delegitimize the State of Israel and encourage boycotting it, led by a network of NGOs.
The Ministry of Strategic Affairs and Public Diplomacy, who leads the government's effort against this phenomenon, concluded that Israel is facing a network of closely linked NGOs which are conducting anti-Israel activities and campaigns which promote the boycott of Israel.

In a special report, the deep link between designated Palestinian terror organizations Hamas and the Popular Front for the Liberation of Palestine, and anti-Israel NGOs promoting boycott divestment and sanctions (BDS) of Israel is exposed. 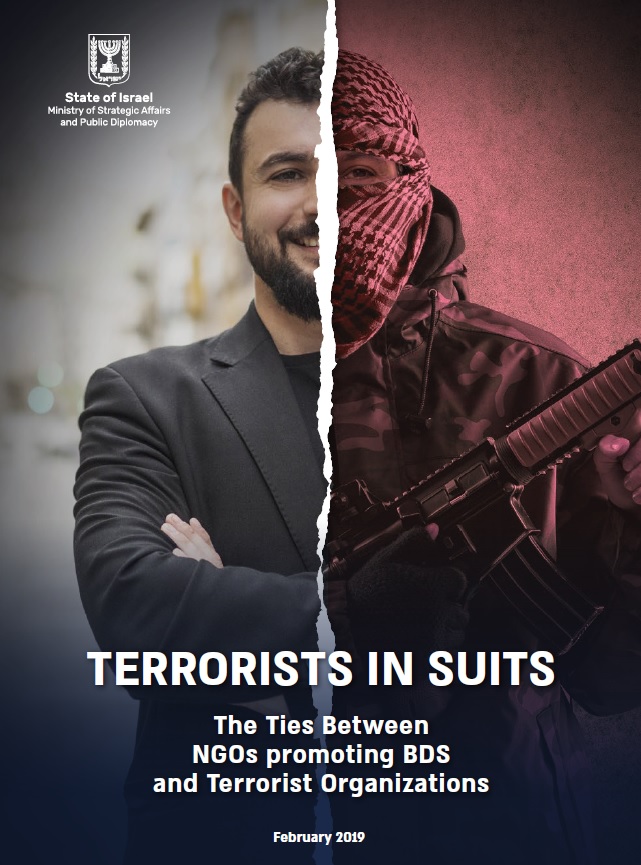 The report examines ties between 13 NGOs worldwide and their links to terrorist organizations and terrorist operatives:

The report found over 100 links between the terror organizations Hamas and the Popular Front for the Liberation of Palestine and anti-Israel BDS-promoting NGOs. In addition, 30 terror operatives were identified -- most of whom served time in Israeli prisons, some even perpetrated deadly terror attacks against Israelis -- serve in key roles within these NGOs.  They have done so while concealing, or at least de-emphasizing, their past involvement in terrorist groups and activities.

The link between terror and BDS-promoting NGOs is a development in the assault against Israel. These NGOs all share a common ideology, namely, denying Israel's right to exist as a Jewish and democratic state and opposing any rapprochement between Israel and other Middle East countries.
This is also expressed in the links among the organizations. Thus, for example, the BDS National Committee (BNC), leads the global BDS campaign, includes a coalition of 28 Palestinian entities, foremost among them the Palestinians National and Islamic Forces – which includes designated terror organizations Hamas, the Popular Front for the Liberation of Palestine, and the Islamic Jihad.

Based on the report's findings the State of Israel is urging Western governments, international aid organization, private philanthropic institutions and international financial institutions to:
A.    Examine the activities of NGOs active in their jurisdiction, which advance the radical agenda of terrorist organizations, and verify that these NGOs maintain no links, direct or indirect, to terror organizations such as Hamas and the Popular Front for the Liberation of Palestine.
B.    To cut off immediately any financial aid given to these NGOs, and to  thoroughly verify that past funds were not transferred to terror organizations, based on international treaties and anti-terror financing legislation.