The Ministry of Strategic Affairs bears overall responsibility for leading the national campaign against delegitimization and boycotts against the State of Israel.
In this framework, one of the issues examined in depth by the Ministry is the transfer of European Union funds for organizations promoting such boycotts.

This provides updated research and outlooks regarding EU financial aid to Palestinian and European non-governmental organizations promoting boycotts against the State of Israel. The Money Trail  focuses on funding provided in 2017, and multi-year funding beginning in 2018 (for which full data has still not been released by the EU), by the European Union to 10 NGOs. Some of the organizations researched were found to have ties with EU-designated terrorist groups.

Thus, there is legitimate concern that European taxpayer money is reaching NGOs which maintain ties with terrorist groups. The Ministry of Strategic Affairs estimates that the total amount provided by the EU sits at more than €5 million a year. However, given problems of transparency, both regarding the data supplied by the European Union and the organizations receiving their funding, it is difficult to specify the exact amount.

The State of Israel calls on the EU to stop funding organizations promoting boycotts of Israel, and to condition any future funding on a commitment not to promote such boycotts; to ensure transparency in all matters pertaining funding of such organizations, including funding transferred to organizations operating in the Israeli-Palestinian arena; and to ensure that funds are not used, transferred, reach or benefit EU-designated terrorist groups in any way, including by halting funding to NGOs with ties to terror groups. 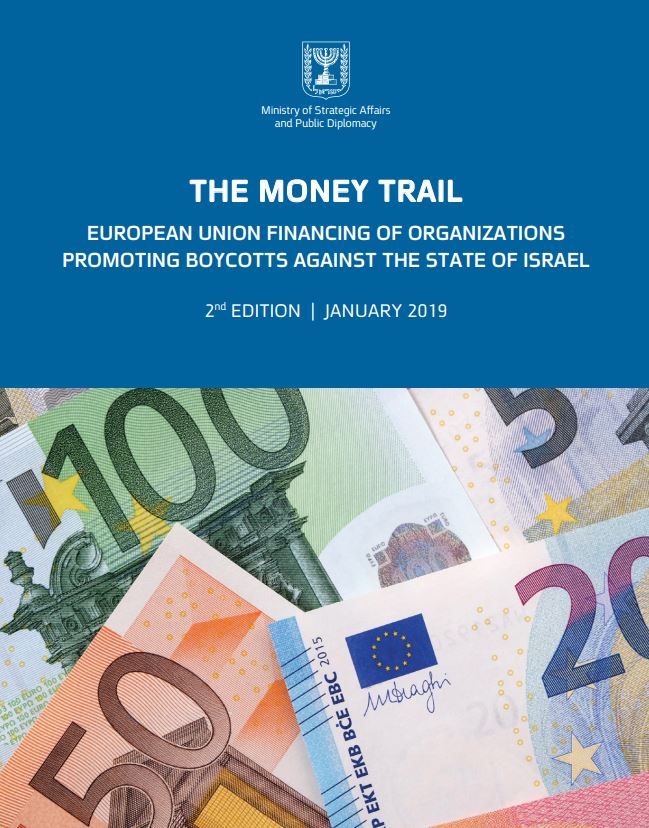